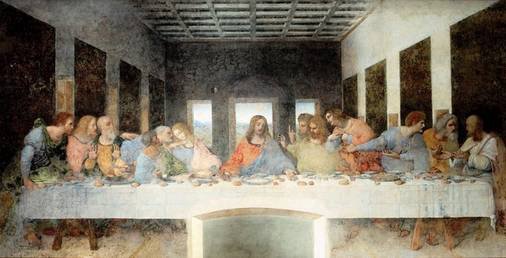 Cambridgeshire Alliance of Lifelong Learners  (CALL) held their first day school since their inauguration, on this theme, on Saturday 30th November, at Bluntisham Baptist Church hall. Back by popular demand, tutor Fiona Lucraft gave a series of four illustrated talks during the day, concentrating on Leonardo’s paintings. Fiona’s handout gave the chronology of the artwork, with some biographical details, adding to which she circulated sample copies of the artist’s sketchbook drawings, as a prompt to interactive discussion about the painter’s methods and intentions.

Leonardo’s notes were written in mirror writing, that is backwards, perhaps indicating left-handedness. Fiona reminded the audience, of some sixty people, that graphite pencils were not invented at that time (15th century – Leonardo died in 1519). Pen and ink were used, also charcoal, as well as metalpoint, a metal stylus to make indented lines on prepared paper. This required precision drawing, as the indented lines could not be erased. Leonardo’s early work, when an apprentice in Florence, included small contributions to bigger pictures, such as a fish being carried, in ‘Tobias and the Angel’ (workshop of Verrocchio 1470-75), identified by stylistic features that became specific to the painter. Paint would have been tempera, powdered coloured earths mixed with egg yolk and oil. Leonardo is famous for his glazes, varying colours built up layer by layer.

In his depictions of people, Leonardo was fascinated by the contrasts of beauty and ugliness, youth and age, movement and facial expressions, also the slight changes to linework to alter male to female faces, or vice versa. Paintings of Madonna and Child were numerous, often commissioned by churches. Other portraits, for example, were at the behest of patrons, and the audience were shown the ‘Lady with an Ermine’ (1489/91) and ‘La Belle Ferronière’ (1498). The Last Supper was shown, first in its very damaged state before restoration, then a copy believed to be quite exact, if done much later that the original, then the restored version, done using the copy. The picture captures the moment Jesus announces he will be betrayed, with the different reactions of those present.

Finally were shown the famous works, such as the Mona Lisa and the cartoon (drawing) for The Madonna and Child with St Anne and the Infant Baptist, the latter being in the National Gallery, London. The four sessions were of art appreciation, so did not look at Leonardo’s technical drawings or inventions. Vera Williams, Chair of CALL, thanked Fiona for her fascinating talks, which were much applauded.